To recognize the critical role the Consular Corps of Miami plays in advancing global dialogue throughout South Florida and beyond, the Steven J. Green School of International and Public Affairs recently hosted a lunch in honor of the corps at the Patricia and Phillip Frost Art Museum.

“This is all the more important in a town where the arts and culture engage so many of our residents and visitors, enhancing the vital role of public diplomacy in South Florida – now more important than ever in a time of uncertainty and turbulence in the inter-state relations,” he added.

Nearly 60 members of the corps, along with others from FIU and the community, attended the event, including Secretary Nabil J. Achkar, Acting Dean Marsha Renfurm, pictured below, and Ambassador Volker Anding. 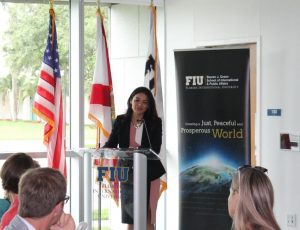 Renfurm presented Dean Stack with a book of Colombian art. She also presented one to Green School Senior Fellow David J. Kramer and a plaque of appreciation to Pedro Botta, senior director of strategic initiatives at the Green School.

“We are very grateful for this invitation of FIU to this lunch in honor of the Consular Corps,’’ Renfurm said.

“The Green School is at the heart of our collaborative global efforts,” said Newman, who heads the Office of Faculty and Global Affairs.

“As President Rosenberg says, ‘Our geography is our destiny.'”

After lunch, Kramer, a former assistant secretary of state for democracy and human rights, presented a compelling talk on “America’s Role in a Turbulent World.”