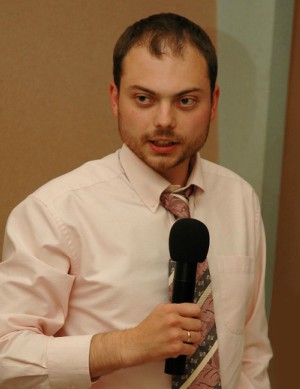 Despite the risk of harm – even death – pro-democracy activists in Russia continue to voice their opposition to the regime of Vladimir Putin.

Opposition leader Vladimir Kara-Murza, who survived two attempts on his own life, explains it this way: “Looking at Russian history, you can see that political shifts can happen quickly and unexpectedly. We do not know how or when the Putin regime will exit the stage, but we do [know] it will, because nothing is forever.”

Kara-Murza recently visited FIU for a screening of a documentary he directed on the life of his friend and fellow opposition leader, Boris Nemtsov, who was assassinated in 2015 on a bridge near the Kremlin.

The documentary chronicles Nemtsov’s life and political career. Kara-Murza said Russian authorities fight against Nemtsov – even in death – trying to remove his memory and legacy.

Moscow police remove items – as simple as flowers – related to Nemtsov in the dead of night to erase any symbols of the pro-democracy leader’s life.

“You can steal away the flowers, but you cannot steal away the memory,” Kara-Murza said. As a way to preserve Nemtsov’s legacy, Kara-Murza led an initiative to name a street in Washington D.C. after his late friend.

Kara-Murza is chairman of the Boris Nemtsov Foundation for Freedom and vice chairman of Open Russia, a platform for civil society and pro-democracy activists launched in 2014 by former political prisoner Mikhail Khodorkovsky.

After the film screening, Kara-Murza engaged in a conversation with David J. Kramer, Green School Senior Fellow in the Václav Havel Program for Human Rights & Diplomacy.

Kramer recently authored a book on the rise of Putin’s regime and his aggression toward the U.S. and the West.

“Being a leader in the opposition and an activist in Russia is a very risky position,” said Kramer, a former assistant secretary of state for human rights and democracy.

The full conversation can be viewed online here.