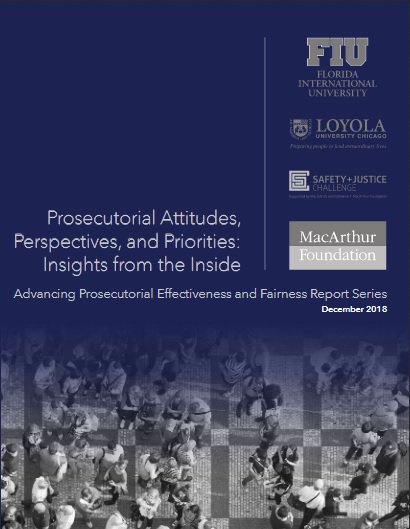 FIU, in partnership with Loyola University Chicago, is implementing a two-year projectwith four prosecutor’s offices in Chicago, Jacksonville, Milwaukee, and Tampa. The project stems from a growing recognition that prosecutors need to become more data-driven and strategic to ensure effectiveness and fairness.

The work will help prosecutors improve data and analytical capacity, develop and implement new performance indicators to assess progress over time, and respond to the need to ameliorate racial and ethnic disparities in the justice system.

Funded by a $1.7 million grant from the John D. and Catherine T. MacArthur Foundation, the project is led by FIU criminal justice professor Besiki Kutateladze and Loyola professor Don Stemen and housed within FIU’s Center for the Administration of Justice.

Through its Safety and Justice Challenge, the MacArthur Foundation has invested more than $100 million in criminal justice reform and research to reduce over-incarceration in the U.S., with a particular focus on the disproportionate impact the issue has on low-income and minority individuals.

For this initial report, researchers interviewed 78 prosecutors and surveyed 275 others online about their priorities, what constitutes success and what they believe are the causes of racial and ethnic disparities in the criminal justice system.

Among the findings: While racial and ethnic disparities in the criminal justice system are a widely acknowledged fact among prosecuting attorneys, most prosecutors do not think they contribute to these disparities. Nor do they believe there is much they can do to alleviate the problem.

Many pointed to a concentration of crime and violence in communities of color as the reason for a disproportionate number of people of color being incarcerated. Very few prosecutors said their decisions may contribute to such disparities.

Prosecutors also had difficulty articulating specific measures of success beyond conviction and sentencing rates. For some, there was a sense that additional measures of success are needed but they were not clear on what those measures would be or how to collect data for them.

The study also found a common disconnect between the vision of the elected prosecutors and the mid-level management staff.

Reform ideas and new priorities do not always trickle down to all levels of the office, and junior prosecutors—many of whom may share the elected prosecutor’s vision —fall back on conventional ways of doing business because their supervisors evaluate them on trial experience and conviction rate.

Data and analysis are underutilized resource within the prosecutorial field, the study noted. Prosecutors were skeptical about how data can help them improve their work.

The findings are the first in a series of three reports from the project. The next two will cover racial and ethnic disparities in prosecution and performance indicators in prosecution.